It was Christmas Eve and things where slotting together nicely. A day off, pass out and a VERY GOOD forecast, certainly not a day to be missed.  3.30am the alarm went off (I knew I’d be tired later that night but Ann wouldn’t miss me if I fell asleep on the couch as she would be watching the box).  By 5am we were leaving Blackburn north bound, Stars shining and the thermometer reading -10.  Like everyone we’d been browsing the Web (The down side of the internet highway.) and all the ice was frozen down to the valley level so frozen Gills where the order of the day.

I’d spied a route call Launchy Gill on the West side of Thirlmere which I’d not done before that looked a good tick. If all went to plan and we where sharp we could get Shouthwaite Gill in as well further up the valley.  As we approached the back road around Thirlmere my stomach started churning, next thing I know I’m throwing up at the side of the road.  There went my breakfast that was all I needed.  Rick thinking the day was done offered to call it a do, but I wasn’t going to give up that easy and would see how I got on.  Eventually we found the car park, and 2 other teams getting ready to walk up to Launchy which was all of 20 min away.  The plus side of having a regular partner is that we had a tight ship and were quick off the mark putting us in the gill first. No 2 hour walk, no aching legs for us today just white ice everywhere.  With crampons and head torches donned from the start we scrambled up the easy sections of the gill being careful not to break through the ice into the cold water below. The thought of being trapped under the ice sharpened my senses, and climbing up the deep gorge felt just like caving only you where surrounded by ice, with the water flowing just below.  At one point we had to straddle the steep walls only made possible because of the build up of ice on either side, it felt like you were in your own little light bubble.  By the time we reached the first steep section we could hear voices from below, the crowds had arrived.  This was my first pure ice of the year and I was nervous to say the least, and I’d won the toss to lead. Even in the depths of the gorge I could tell it was getting light, I stepped up into a steep corner; and cautiously made my way up on to a ledge and composed myself.  Ice screw in, deep breath, “relax this is what you’ve come for I told myself”. Tentatively I probed out left on to steep ice, another screw increased my confidence followed by a couple of quick moves and it was all over. A warm glow around me I rigged the belay and relayed that I was safe. As usual Rick followed with little effort, he was climbing well and the pitch was within his comfort zone.  All that training was paying off, not to mention 6 weeks cycling in the Alps.

Easy scrambling now led to the main event, a 60 ft wide curtain of ice, 60ft high and all of it nice and thick.  Teams that had bypassed the first pitch where now taking the line on the right, this left us the steep left hand section. Rick methodically carved a route up only stopping to put in the occasional screw, even though it was pouring with water at one point.  I wasn’t laughing as I knew it would be my turn soon and there was no way of avoiding it.

With time to spare we abbed back down and I took the central line savouring the moment and making the most of the day.  By the time we reach the top pitch the crowds had gone through leaving a lovely Gr3 ice pitch!  Rick was having none of it, apparently bored of plodding up bits of ice and was in need of a bit of spice and opted to dry tool his way up the steep rocky ground to the right.  It didn’t look that bad watching Rick scratch his way up with his two token wires for protection, at least I wasn’t leading! My turn came and I can tell you it was a shock, things never seem that steep until you get on then and this was awkward as well as steep. Nor did it help that I felt weak as a kitten, maybe the effects of throwing up earlier were now starting to take its toll, only made worse by the fact we hadn’t stopped to refuel.  Eventually I pulled over to see Ricks beaming smile, how many times had I had that smile over the years now I was getting a taste of my own medicine.

As we broke cover on to the open fell the sun was shining and the day was still young, watered and fed I was starting to feel refreshed and ready for more.  The easy option would have been to saunter back down to the car and have a leisurely drive around to access our second objective.  That just didn’t seem right; we’d be cheating, not putting our mountain legs through the usual grind.  Looking at the map it didn’t seem that far to walk over to Shoulthwaite Gill, 5 k at the tops and yes it was across country but it still seemed feasible.  Definitely a case of looking through rose tinted glasses, even Rick thought it was a good option even though we’d no plan of how we would get back to the car!  With sun on our back we set off, everything seem to be going well with the sun helping to recharge my battery’s  We were even enjoying picking our way traversing the fell side until that is we where funneled across ever steeper ground followed by snow on loose scree. By this time I’d had enough and to make matters worse we were struggling to find the bottom of route and in danger of passing right underneath it.  Fortunately a team was approaching from the other direction, (probably thinking what the hell are those guys doing) and it was obvious where they were heading.  Rick seemed oblivious to my plight and steamed on up the fell side with me having to keep stopping to catch my breath before eventually arriving at the base of route 2 hours after making a bad decision. 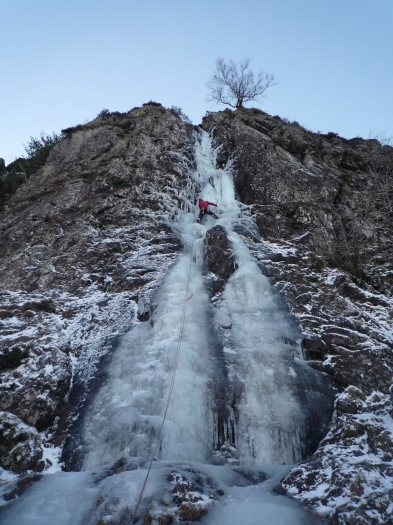 At least the Route was in nick, I’d gone to look at Shouthwaite Gill over 25 years ago armed with only curved axes. Screws hadn’t been invented at that time, neither had all the fancy kit we have today.  Needless to say we’d backed off and whimpered up snow to the side. Looking at the guide now it’s graded a stiff 5 so we had Nowt to be ashamed of. Now 1.30 and with a team climbing and one waiting I knew it was going to be a long wait. Time to don the duvet and get some calories down our necks if I was going to have any chance of climbing it, I had already started to think we’d bitten off more than we could chew.

Feeling warm and fed the more I look at the route the more I fancied leading it, but could I pull it off? Rick was very quite, I could see he was contemplating and had that crazed look in his eyes like a man possessed.  Finally Rick broke the silence “Are we going to toss for this pitch” as if I could say no. (I couldn’t look it all hung on to which hand the stone was in) to do or not to do! Rick’s smile said it all.  3.30 with the light starting to fade Rick started up the steep wall of ice, relaxed, methodic and in control. By 30 feet he’d got an screw in and was well on his way up to the half way ledge and a chance to get his breath back before the steep upper section.  He clipped into an insitue wire on the right before things start to get really steep, then following a shallow steep grove placing several more screws before finally reaching easy ground in the upper gully.  120ft of solid ice under his belt, certainly one of Lakeland’s gems and a cracking lead for Rick, not that I’d had any doubt he’d get up it.

Even at this late hour another party of 3, (part of the MRT from Wales) had move in behind us, I don’t know how many teams had climbed the route that day, maybe half a dozen.  Hearing the fool hardy story of our approach one of the team offered to run us back to Rick’s car, seemed to me it was a good excuse for her to avoid getting benighted on the route.  Yippee our ticket home, all at the 11th hour, the plan finally comes together, all I needed to do now was finish what we’d come to do.

Sackless and leashless I inched my way up the ice, yes it was steep and I do know it would have took all my skill and determination to lead that pitch, all credit to Rick but that’s what having a partner is all about sharing the leads and the dangers.

25 years in the waiting but it had been worth it, it had been a fantastic route and one thing’s for sure we were the only daft buggers to link the routes together on foot that day!

Comment by Brian Knowles on January 22, 2011 at 21:29
Thanks , Derek .sounded like an excellent day spent in good company(or a good day spent in excellent company).Never ones to shy away