IMG_20220204_102337.jpgWe had thought we might do the Ben Nevis horseshoe but with very high winds and
- 20 wind chill forecast on the tops l decided to give it a miss and stay low.
Andy, Barney and myself decided to walk over to Kinlochleven via the West Highland Way.  I'd not walked this route before and l was pleasantly surprised on how scenic it was with…

High Street ride Definatley my toughest ride for a long time, this was one of our first mountain bike rides over 30 years ago on rented bikes curtasy or Derek Holts D Tours. Back then the there was n…

Definatley my toughest ride for a long time, this was one of our first mountain bike rides over 30 years ago on rented bikes curtasy or Derek Holts D Tours. Back then the there was no such thing as suspension and the brakes were cantileaver type. The only lasting memory l have is how recked my wrists were with the vibrations and squezing the brakes. Leading up to the weekend the…

Man verses Horse
Saturday night a post came through via Whatsapp about a Mob MTB ride on following morning buthe forecast was for a winter front to push through turning to rain later did nothing not the most inspiring. Awoke 6.30 and peered out of the window expecting the worst but it wasn't that bad so by 7am l was up and breakfasting but still unsure whether to join the boys. Having Ridden up past Tottington to Holcombe for 9am there was no sign of anyone so a quick check of the phone…

We would like to post Christmas Greetings to all the members of the M.O.B., and to thank you for Cards and Greetings which have been sent. We look forward to seeing you all in the Spring.   REG AND V…

We would like to post Christmas Greetings to all the members of the M.O.B., and to thank you for Cards and Greetings which have been sent.

We look forward to seeing you all in the Spring.

Mark’s suggestion of a days climbing on Tryfan sounded just the ticket and soon the team had grown to 6 lads all keen to get a good mountain day under their belts.  On the way down it was raining quite heavy and with a good weather forecast we were beginning to feel cheated.  As we drove down the A5 into Ogwen the rain stopped just as we were parking up right on queue, perhaps the weather men had got it right for once. Walking in under Millstone Buttress on the approach to Heather Terrace…

Time call on the Rhododendron

The day went better than expected; with almost 50 turning out from the Bolton ConservationVolunteer group and the climbing fraternity which include 8 from the Mob.

It was obvious as we struggled to make our way to the designated location that this was not going to be your average clean up day.  When I was told we where clearing Rhododendrons I hadn’t envisaged how big the task would be, thankfully the Volunteers had and they were well prepared.  The basic brief was that the…

For the past 30 years members of the Mountaineering Club of Bury have had strong links with Lakes based Longsleadale Out Door Pursuits Centre (LOPC), with many members belonging to both groups.  I myself have fond memories of the Centre having spent a lot of time there in the late 70s and early 80s, as many others I've moved on but not forgot my links. I I I  I   After reviving a flyer from the centre promoting a taster day on Nov 5th to boost instructor numbers. This got me thinking that we…

Sunday’s trip to Froggatt didn't turn out quite as nice as we had expected but the weather held off allowing us to get stuck in to some classic Grit Stone routes. I was surprised to see how quite the crag was for a change, perhaps the change in the weather put a few off.

Highlight’s of the Day were Mark Russels lead of Pendestal Crack his first HVS on the Grit, not bad as the routes then to be a tad on the…

The last time I was in Corien an Lochain

It looked like the Lairds weekend would be the last chance I had to get up to Scotland this season so I was keen to make the most of it. My last trip up to the Cairngorms with Keith, although an enjoyable one had not been…

It was Christmas Eve and things where slotting together nicely. A day off, pass out and a VERY GOOD forecast, certainly not a day to be missed.  3.30am the alarm went off (I knew I’d be tired later that night but Ann wouldn’t miss me if I fell asleep on the couch as she would be watching the box).  By 5am we were leaving Blackburn north bound, Stars shining and the thermometer reading -10.  Like everyone we’d been browsing the Web (The down side of the internet highway.) and all the ice was…

It is with regret that I have to inform you that Geoff Fletcher Passed away last Friday night. He had been ill for quite a few years but had not let it get him down and he stayed as active as he could right up to the end.

Geoff started coming out with the club back in the early 80's and came on many weekends.

He had been a very keen walker and fell runner "Probably…

On the road to recovery

On the road to recovery.doc

Ups and down of a paraglider (The un-edited version)


Ups and down of a paraglider.doc

View looking down Therlmere and one down to Brothers Water.… 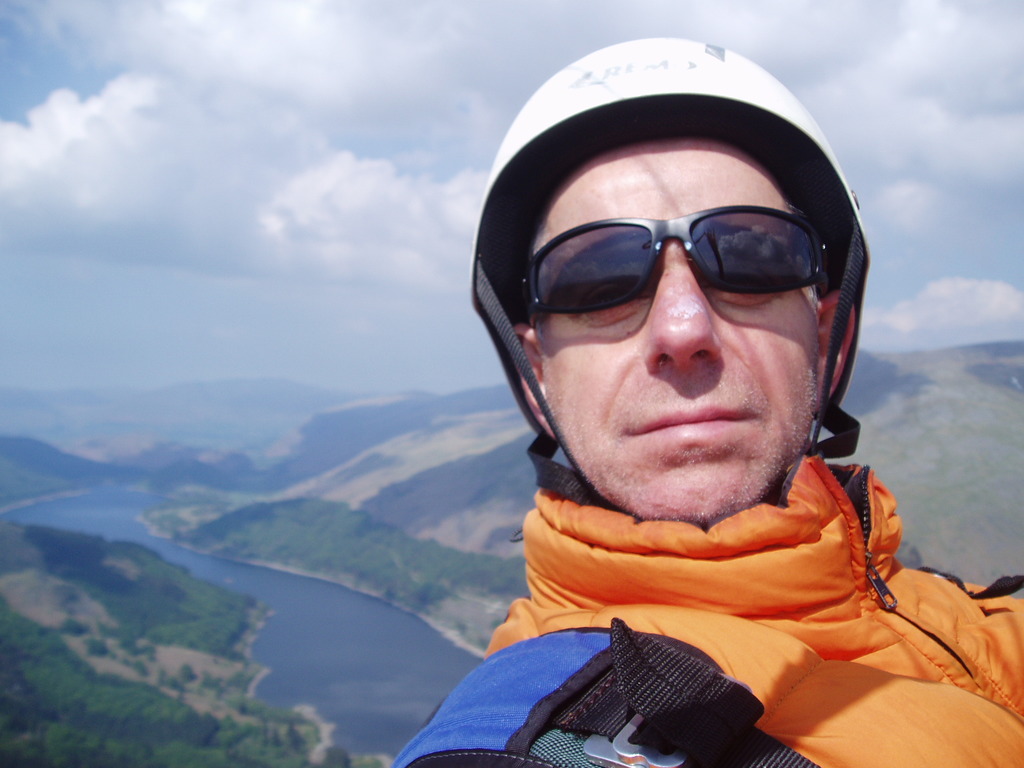 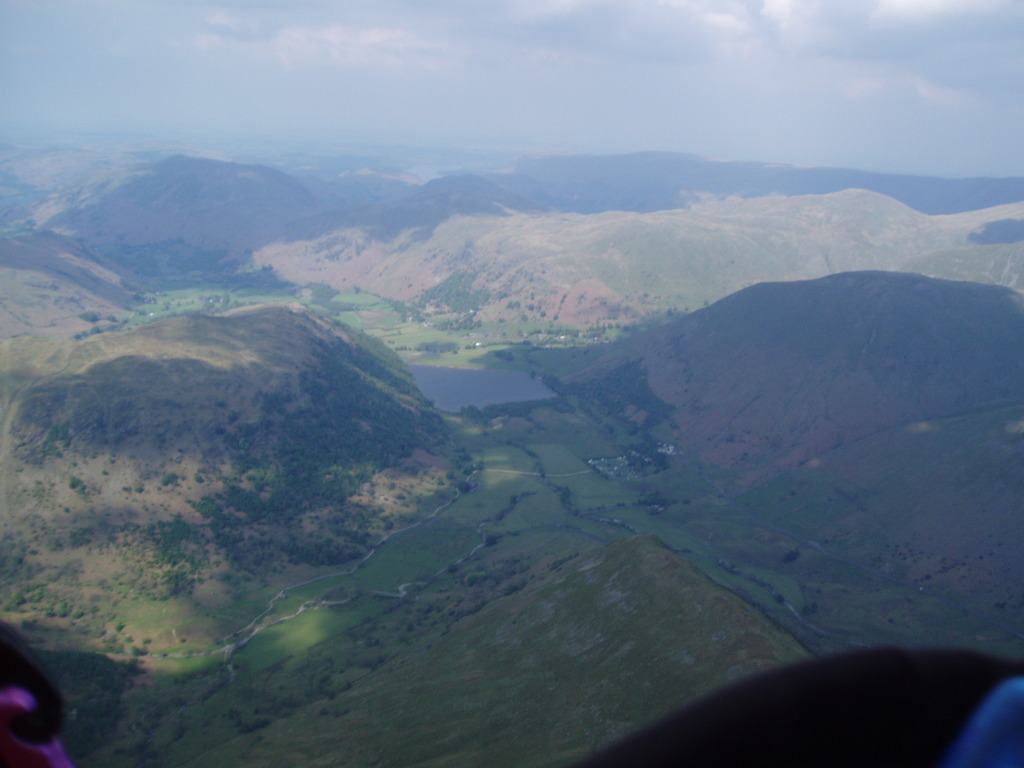 Mayday camp at Regges on Anglesey

The plan was to go to Dow Crag in the Lakes on Saturday with Rick, Keith and Barney.
Studying the weather forcast and Road conditions we weren’t sure whether we would be able to get over to Coniston, but it turned out ok. Last time we had ventured up to Dow crag back in November it had been pissing it down and Mike and I had had a hard, wet time on Giants crawl. Today was totally different as we passed by a frozen Goats water with Dow Crag bathed in Sun shine, you could have been in the… Continue

After our first taste of winter Rick and I where very keen to make the most of this unusually good winter period, because as you know it’s been a long time coming.

With the Christmas celebrations over, my mind was focused on making the most of it, but where should we go? In the end with less snow to contend with we plugged for the Welsh mountains.

Monday 4am the alarm rung time to get sorted, Scrape the ice off the car and meet up… Continue

What a winter this could end up being, Scotland has had a hell of a plastering of snow and even the Lakes is full to the brim with the white stuff.
While my thoughts are in winter mode I reflected on past trips and remembered a day out with Dave Owen in 2004. It brought a stark reminder of how fragile our winter play ground can be, you hear it every year about climbers getting caught out in Avalances.

The forecast wasn’t looking to good, but that didn’t stop us filling the hut. Keith and I arrived at 5.30 on the Friday and decided to take full advantage of the lovely evening. Dumping the Sacks off we plodded up to the Col behind the Lagangarbh hut with a view to flying up the back of the Buachaille Etive Mor and as usual suck it and see. It took us an hour to get up to the col, and we were rewarded with a nice breeze and a perfect launch site, but would it be enough to soar up the south west… Continue

On the Friday I managed to get an hour in at Edenfield after work, conditions where lovely and with few there I was able to do some well needed practice on my thermaling. Mark Wilson was there talking about the coming Sunday how it was set to be one of the best XC days for years, and Parlic was the place to be. By the end of our chat I was well fired up for a well over due crack at a decent XC, which up to now had been mostly extended ridge runs, or XC’s abroad.