Man verses Horse
Saturday night a post came through via Whatsapp about a Mob MTB ride on following morning buthe forecast was for a winter front to push through turning to rain later did nothing not the most inspiring. Awoke 6.30 and peered out of the window expecting the worst but it wasn't that bad so by 7am l was up and breakfasting but still unsure whether to join the boys. Having Ridden up past Tottington to Holcombe for 9am there was no sign of anyone so a quick check of the phone flagged up a change to the meeting point. Eventually meet up with everyone and we set off up over Holcombe via More Bottom road with Mike Magee and Mr Waring on their electrics and Mike Slater and myself on ower trads. As we started to gain hight the snow started to fall and we soon entered the winter zone but thankfully it wasn't to icy. The plan 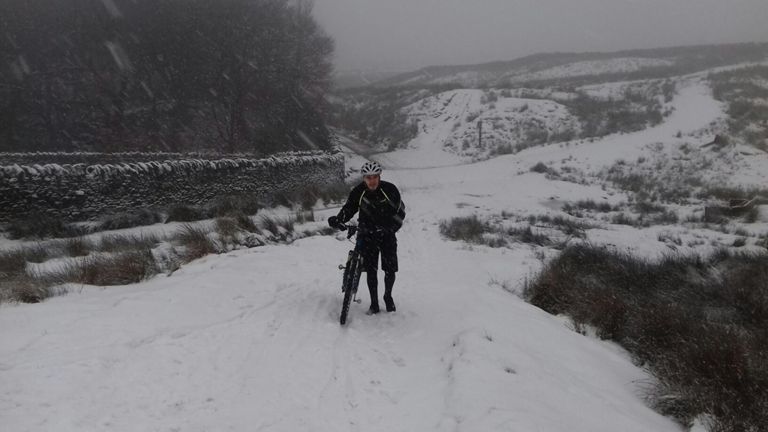 was to ride over to Helmshore and take refugee in the cafe for a brew and some grub. Traversing Holcombe was great fun and the descending down from Robinhoods well proved to be pretty tricky and we were glad to arrive safely at the cafe to the bewilderment of the other customers and staff. On days like these egg bacon butties washed down with a hot brew taste all the sweeter and looking out of the window we were in no rush to go anywhere. Eventually we couldn't put it off any longer as the snow was by now coming down hard and we knew that it would be a bit of a slog home.
On the way back John insisted that we had a go on his electric so Mike and l took a turn in sampling the future of MTB riding and l must admit it was a bit hirey at first but good fun. By now we had dropped back down in to the wet zone and l was starting to feel the cold and with the on set of hot aches l was ready for home. Coming back via lrwell Vail, Nuttall Park and Summerseat both the electric boys came off, probably due in part due to to much power in the slippy conditions. Saying our goodbyes at Summerseat l set of on the climb out and hopefully generat some heat before the final dowehill home. Rolling in at 12.30 l'd had my fill, it had been a rough but enjoyable ride and l was pleased I'd made the effort. Thanks for the message boys, every ride counts.

All l need now is a hot shower.