The day started well with a prompt start at 5am, a trouble free drive down with great company ( Colin, Mark Davies and Derek) and a walk into the crag ( Black ladders) on firm snow. Having been piped to our chosen route on the last visit, Derek and I set a good pace into the crag determined not to be overtaken. As the ground got steeper the snow got deeper and we were soon swimming up through what felt like polystyrene beads. It was hard work and we attracted a party of four following our tracks into the gloom of the low cloud. We had a friendly chat about objectives and we were clear we intended to climb Pyramid Gully a (grade 4) which we had not managed to get to first last time round. They said “ they didn't know what they were going to do” , the alarm bells should have begun to ring then!

Visibility was so poor we couldn't really tell where we were and so we stopped at the foot of the buttress to gear up. There was some discussion with the other group about our location and with a brief brake in the cloud we pointed out the main lines to them ( as we had already been there that week) as they appeared.

Just as I was tying into the ropes there was a mad scramble of bodies pushing to the front and obviously all heading for our objective. My trust in human nature had been dented again and we were beaten to the start of the climb by 20m, after breaking trail for these guys all the way up.

A quick decision was made to go for the next available line ( Jacobs Ladder Grade 5) which it has to be said looked very good and only one grade harder ...how hard could it be?

Having pinched some of the plumb leads on our last visit I was quite happy to give Derek the first , and what looked like the best, pitch. It looked like just the kind of challenge he thrives on, and so it proved.

Derek as always lead the very steep ice fall in style making it look a lot easier than it turned out to be. When it came my turn to follow I realized just how steep it actually was and I arrived at the belay pumped. A combination of wet gloves, pumped arms and possibley hanging in leashes meant that when the blood did start to come back into my hands I was doubled over in pain. Whilst I was grimacing from hot aches which almost had me in tears, Derek showed his usual compassion by having a chuckle and taking a photo for the record. 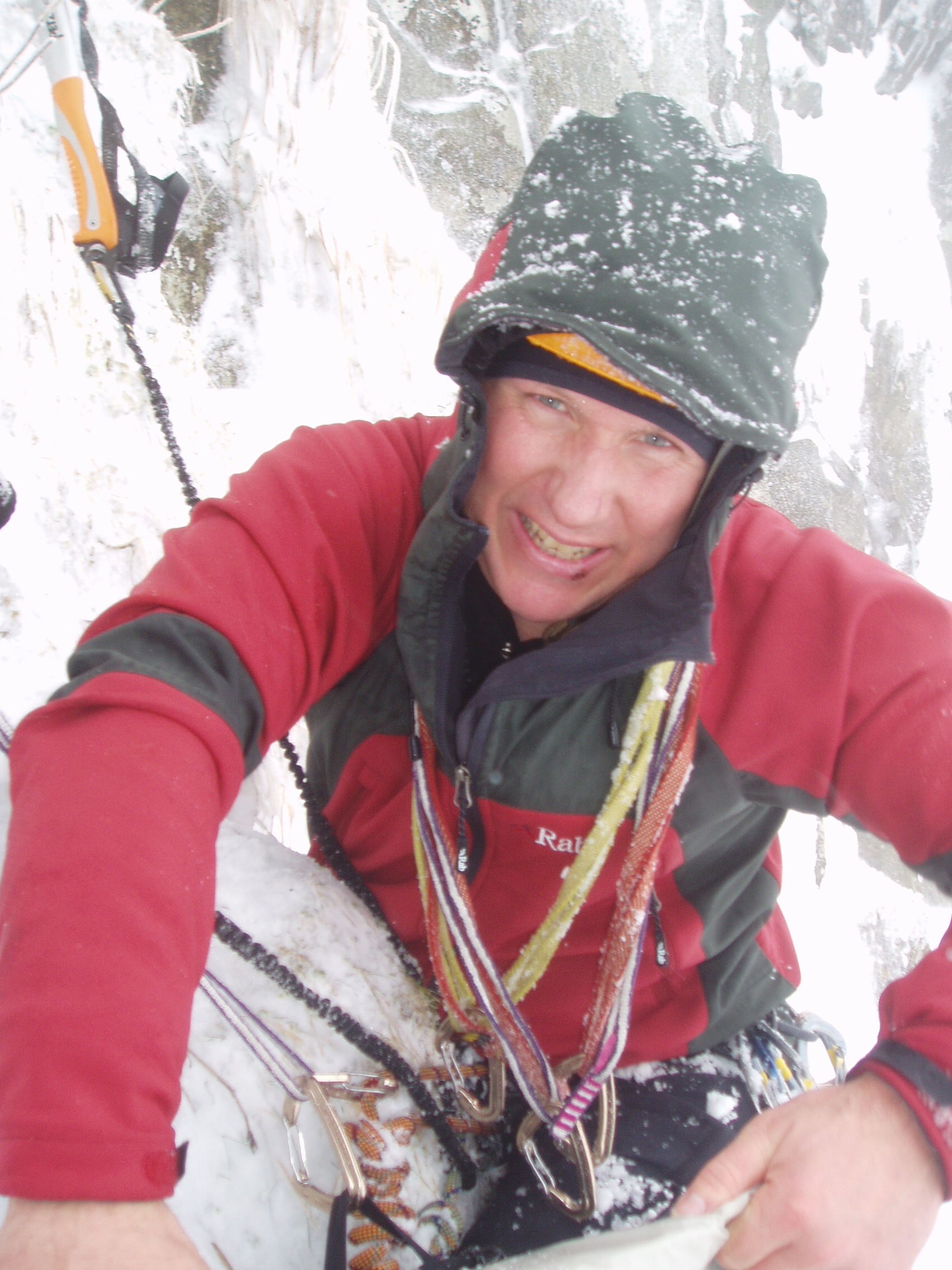 With blood now returned to my extremities I set of on the right hand traverse to where I expected to find some “ ice filled grooves”. What I found were grooves but no ice, and they looked steep. I didn't fancy that and so looked further right....more of the same. “Well” I thought “ maybe that 's what grade 5 mixed looks like!” I could feel Derek and the team which had now followed us starting to get impatient with my dithering and so I committed to “have a look”

That often used but wholly inappropriate phrase “ have a look”. As I found out very quickly, if you don't then like what you see, its tough shit mate...your committed.

1.An almost vertical blank series of rock grooves with half frozen clumps of turf at intervals.
2.Very little protection of even a “psychological “ quality.
3.A huge gaping void below.

After climbing what felt like about 10m above my last bit of gear I realized this was now serious! I was climbing at the limit of my ability, starting to get pumped, had one crampon on a small bit of turf which threatened to give way at any moment and the other with one point on a small edge. At that point one tool ripped and my feet skated off....I was now hanging by one tool thinking …..so this is how it happens!! ( my second thought was .. climbing leash less...fuck that!!!)

Its at moments like this that you find that bit of strength you didn't know you had and I quickly had the other tool in and my feet back in position, all be it on a slightly smaller bit of turf!!

I now resolved to not go anywhere without putting in some runners and began excavating the one crack I could find. What seemed like a good half hour ( was probably longer!) passed with lots of hand swapping and hammering of nuts into cracks which were too small for them. I now had two small nuts in, neither of which I would be happy to lower off, but perversely now felt happier climbing above.

There were no more runners to the sanctuary of the belay which arrived after about ten more meters of dry frozen vertical turf. I threw a sling over a block and relaxed.....the next pitch wasn't my problem....and thank god cos it looked even harder!

I could tell was also finding it hard because the rope suddenly went surprisingly tight as he took a lob and I could just imagine his axe ripping through the turf just as mine had. ( I never told him I'd almost fallen – it didn't seem like a good time)

When he arrived at the belay he didn't have the look of someone who was still enjoying “the challenge”, though to give him his due he geared up and had a ferret around to find a way through what looked like grade VII ground above.

At this point sanity reared its ugly head and we decided to bail of and live to fight another day. Before we could do that though we very kindly dropped a top rope down to the team below who's leader was now shouting “ watch me, watch me” at increasingly regular intervals. He first refused the offer until not having moved for quite a while, sanity caught up with him aswell.

My bomber belay block now underwent a little closer inspection as I was about to trust my life to this single bit of the mountain, and worryingly it seemed to only be attached to the rest of the mountain by a thin layer of ice!! and a tap with the ice tool brought a sickening hollow sound.

Derek by this time was beyond caring and to be fair it was the lesser of two evils. Derek went first and the thing stayed put but I still felt a bit sick every time I bounced on the rope as I followed. Two quick abseils and we were down and mighty relieved to be there. Within minutes the other team had followed our lead and bailed. 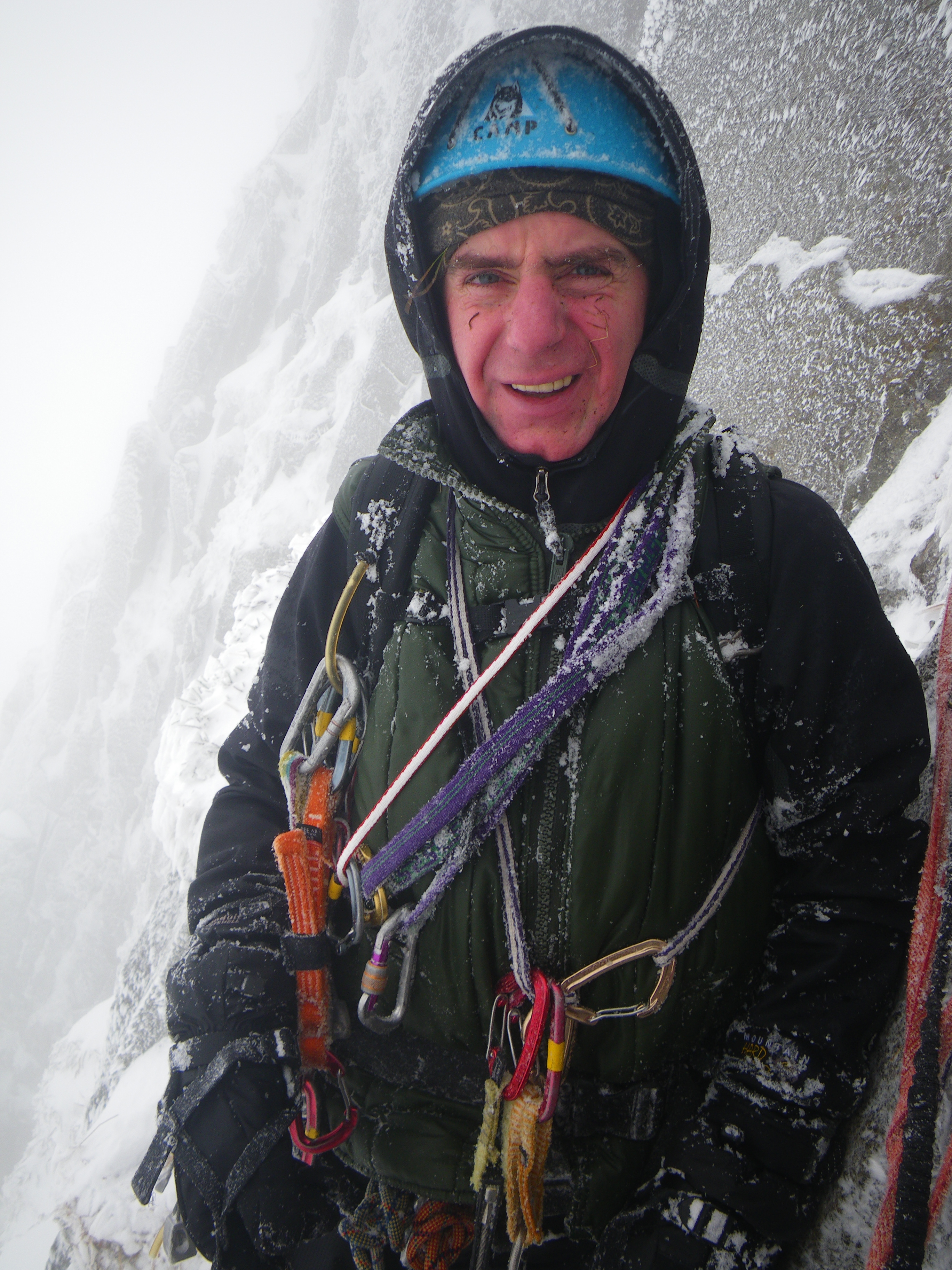 This pitch was undoubtedly the hardest thing I've climbed in winter and without doubt the most committing. However we survived to learn the lessons, first and foremost, don't underestimate the seriousness of those little words...” I'll just have a look” or “I'll give it a go” ...they may be your last!