And we are like a sitting duck on a 47ft yacht in the English Channel, in the dark and in the fog!

Our race over the weekend of 13th and 14th June was organised by the Royal Ocean Racing Club (RORC). The Race Committee designed a course that would take the competitors East out of the Solent to the Nab Tower lighthouse (see photo) then West around the Isle of Wight. This was followed by heading to Poole No 1 Buoy and to North Head to finish giving us a total distance of 126 nautical miles.

Our day started at 7.30am as we left Southampton to sail over to Cowes for our race start at 9.30am. During this time our skipper put us through our paces and practised sail changing and tacking and some gybes – and we thought we would have a leisurely trip over drinking tea and enjoying bacon rolls! Ha! Think again.

More yachts where milling around the start line, this is a very tense time as everyone is trying to not collide with each other. As the time draws closer to the start we position Pi-Squared within the start zone and the cannon fires to signal the start and we’re off…

… Or so we thought. The force 3 – 4 winds (7 – 16 knots) which had been forecast decided not to put in an appearance, so around 100 yachts hoisted up Spinnakers to try to catch what wind there was. We bobbed along at a boat speed of 3 knots – a lovely speed to go at when cruising and enjoying a G&T.

Once we had rounded the Nab Tower lighthouse (worth doing a Google on this from a war time historic interest) the winds picked up and we had some good sailing along the south coast of the Isle of Wight. 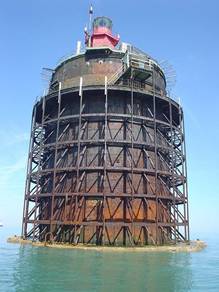 We were on deck for the first watch followed by a short three hour rest and where we tried to get some sleep, which is really hard as the cabin is beneath the cockpit area and it sounds like a herd of elephants are on board when the crew are tacking or grinding sails.

At the start of our next watch we were in the English Channel moving at around 8 knots boat speed, and chasing the tidal gate before we got to the Poole No 1 buoy. As the daylight started to disappear the fog slowly rolled in and in, and in. The area around us was grey, turning darker as the night drew in. The blanket of fog surrounded Pi-Squared and visibility was nil; and the breeze was dying away.

Our senses of sight, sound and smell where enhanced, as we scanned the fog for lights from other yachts close by. When a yacht’s navigation light was spotted, we shone torches onto the sails so others could see us. We could hear a fishing boat in close proximity; although we never actually saw his lights we could smell the aroma of stinking fish on the air. The fishing trawler disappeared and we could no longer hear, or smell him, everything was quiet. That is until we heard an engine rumbling in the distance. The crew all agreed the general direction of the sound and warned the Skipper. Our Skipper, Fin, came up on deck saying that the engine noise we could hear was the “Condor Ferry from France heading straight for us at 38 knots”. A swirl of sheer terror spiralled through my stomach. Visions of a ferry appearing out of the mist like Davy Jones and the Flying Dutchman, passed through my mind, and stayed there. As the rumbling of engines increased I made sure I had my knife close to hand, in fact, it was in my hand in readiness to cut myself free from the clips which we have to wear for night sailing. After about half an hour the engine noise started to recede into the distance and our Skipper advised very calmly that the ferry was headed for Poole and we were well past Poole harbour. Phew!

Now not knowing what the Condor Ferry was or what it looked like I looked it up on the website. 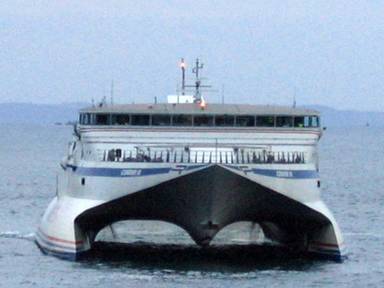 It is a 5,000 tonne ferry, which can take 185 cars, 750 people, 86 metres long and can motor at 41 knots. We, on the other hand, had an overall length of 11 metres and had 13 people on board. David and Goliath!.
Dawn broke and the fear of the night seemed a long way a way. The winds where picking up as we rounded our last channel marker and headed back to Southampton. With the previous experience of going into a broach the crew were anticipating this event as sails were changed and winds picked up.

As the forecasted winds did not appear and given the lack of wind the Race Committee took advantage of their ability to shorten the course as the fleet approached North Head for the first time. Otherwise a few hundred people wouldn’t have been at work on Monday morning. Pi-Squared made a respectable placing of 6th out of 14 yachts in the Class 1 category. Our Skipper, showered the crew with praise for good sail trimming, this was as a glorious feeling a crew can have just like having praise from Simon Cowell.

“When you have been hand steering for six hours through the night, going backwards on the tide, you need a sense of humour and the RORC fleet knows how to make the best of things. This may not have been a high octane, adrenalin pumping yacht race, however the fleet showed tenacity and made the most of the conditions.” http://www.yandy.co.uk/news/?article=147033

Don’t forget this is a really hard challenge and I am doing this for two charities so please make a sponsor or donation to Teenage Cancer Trust or Odyssey. Details below: